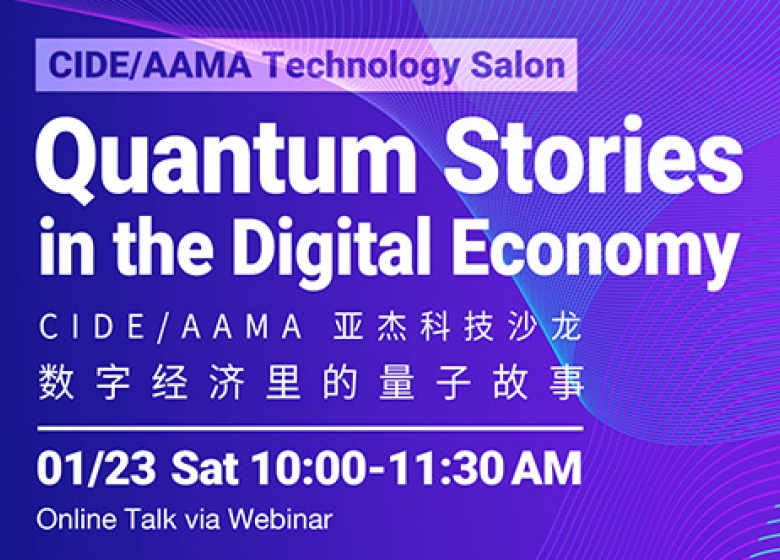 Recap|Technology Salon-Quantum Stories in the Digital Economy By Yusi | News | 2021.01.25

On January 23, 2021, CIDE, together with AAMA-PRD, HKSTP Ventures, invited three domain experts to hold the first online technology salon in 2021 and share their insights on quantum computing.

Quantum sounds like a very profound concept. How should we understand its basic principles? What will happen when digital economy encounters quantum science? What is the current investment situation in quantum computing throughout the world? How will quantum computing change the world in the future? Let’s review this webinar and find the answers. 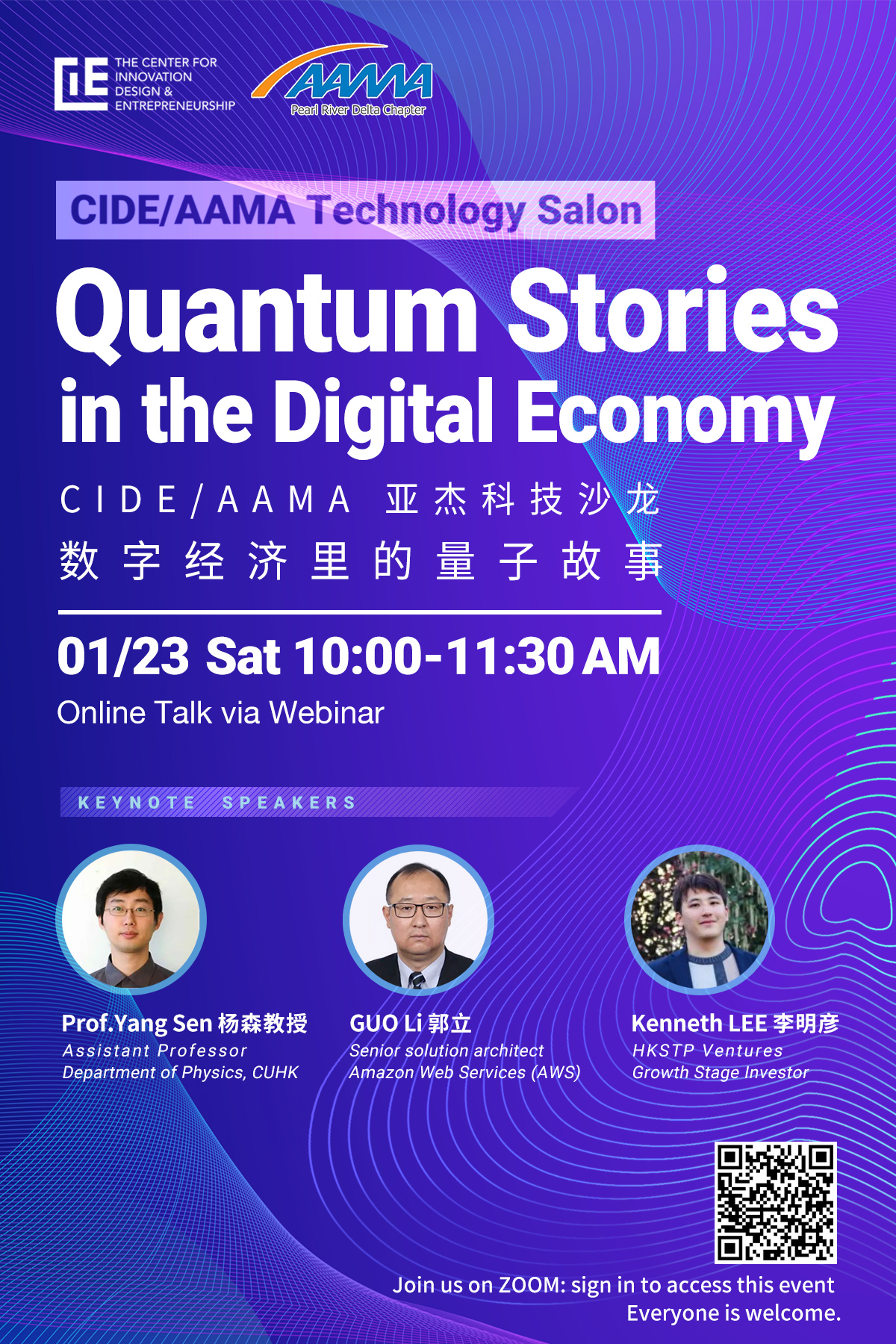 The salon was chaired by Mr. Eric Ho, Director of AAMA-PRD and Chief Information Officer of Hong Kong Ocean Company.First, Mr. S.C. Mak, Co-President of AAMA-PRD, was invited to deliver an opening speech. Mr. Mak said that quantum computing entered public view about six or seven years ago. Three years ago, China announced the opening of the global first quantum communication trunk line from Beijing to Shanghai. At the end of last year, University of Science and Technology of China released “JIUZHANG” quantum computer prototype, which is millions of times faster or even higher than today’s supercomputers in operating rate. Quantum computing seems to have a bright future, but what are its specific applications? Does China precede in this respect? The three special guests will tell you about the world of quantum computing from different dimensions.

The first guest is Professor Sen Yang from Department of Physics, the Chinese University of Hong Kong. He led everyone on a “quantum computing tour”. 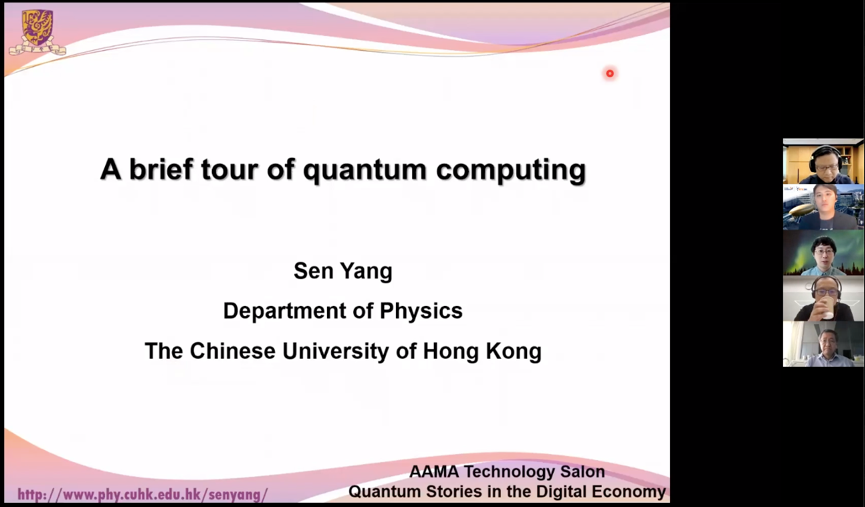 Professor Yang explained the basic principles and concepts of quantum from “what is quantum” in simple language. In the classical case, the physical quantity is continuous, but in the quantum case, the physical quantity is separated. Qubit is the basic information unit of quantum computing. Qubit can have two or more than two multiple states (superposition states) at the same time. Professor Yang used “Schrodinger’s cat” as an analogy. If the box is opened, the cat is either alive or dead. But before the box is opened, the cat has two states: either being alive or dead. 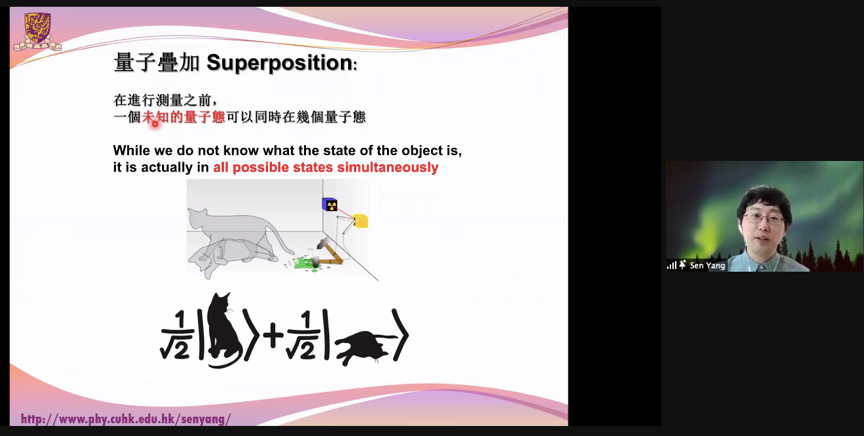 Next he explained why the road to exploring “quantum computing” is difficult. Qubit is fragile and easily disturbed by the surrounding environment. Minor changes may input energy to the quantum and invalidate the qubit. This is a huge challenge in quantum computing measurement at the moment. 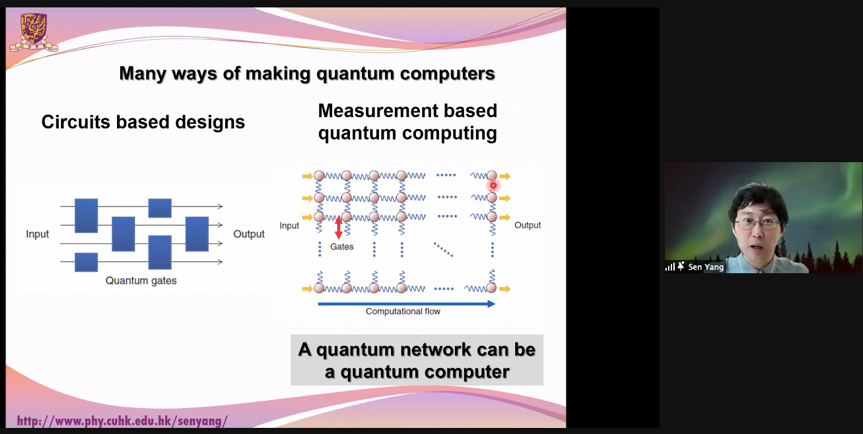 The second sharing guest is Mr. Li GUO, senior solution architect from AWS. Mr. Guo believed that quantum computing can be used in the fields of chemistry and material science in the future to solve some problems that require high computing. 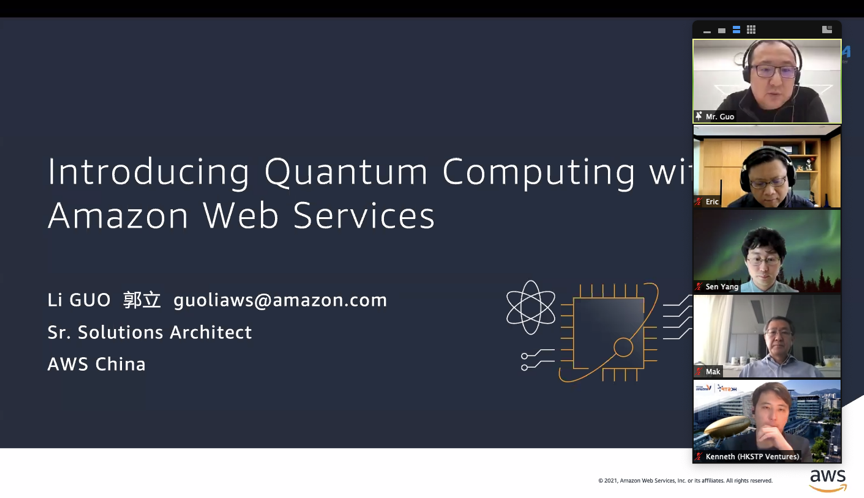 AWS provides a friendly environment for developers and researchers, so that more users can afford the cost. Quantum computing experiments are carried out with Braket as the access point so that more applications are developed to form an ecosystem.

Mr. Guo also made a detailed live demonstration of quantum computing coding for the audience, to learn more about how AWS actually helps developers and researchers in this field.

Finally, Mr. Guo said it may take another 3-5 years or more for quantum computing to be commercially available.

The last guest is Mr. Kenneth LEE, a venture capital investment analyst from HongKong Science Park. Mr. Lee shared with the audience some of the current commercial status quo of quantum computing and his personal insights of investing in quantum computing.

Tycoonshave laid out in advance to build their own ecology in order to achieve “quantum hegemony”. Mr. Lee also made his own analysis and predictions on the recentopportunities in the field of quantum computing and the trends in 2021.

Although quantum computing is a topic of minority, the online audience of this salon is nearly 60. The audience discussed the topics shared by the guests and raised a lot of questions. 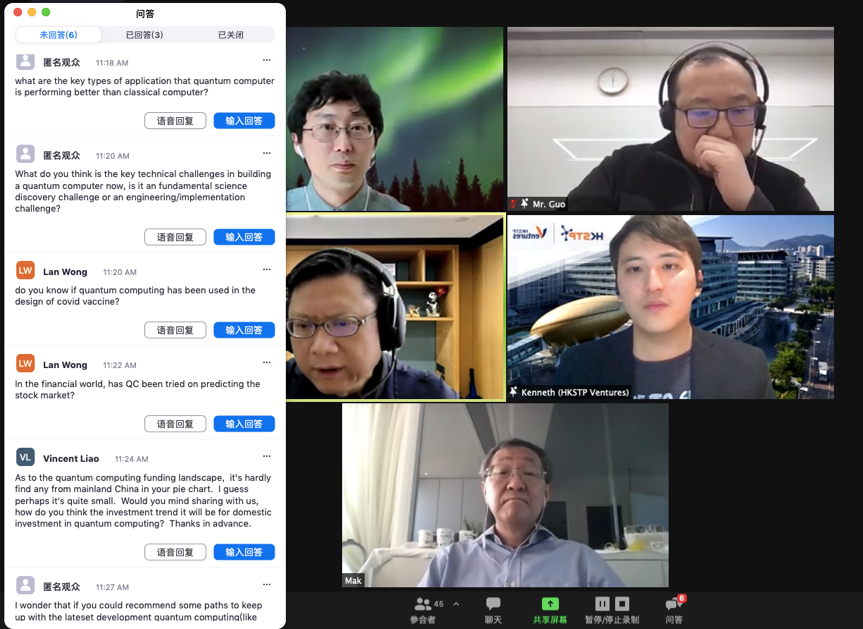 Some viewers have asked whether quantum computing can help travel through time and space, as in the movie Avengers. Professor Yang Sen replied that there was still a big difference between film and reality and the two should not be confused.

Some viewers were interested in AWS’s quantum computing service and asked about the minimum charge. Mr. Guo Li also made a detailed answer, he also admitted that only some users were trying to use it, but the real commercial application was still a blank. 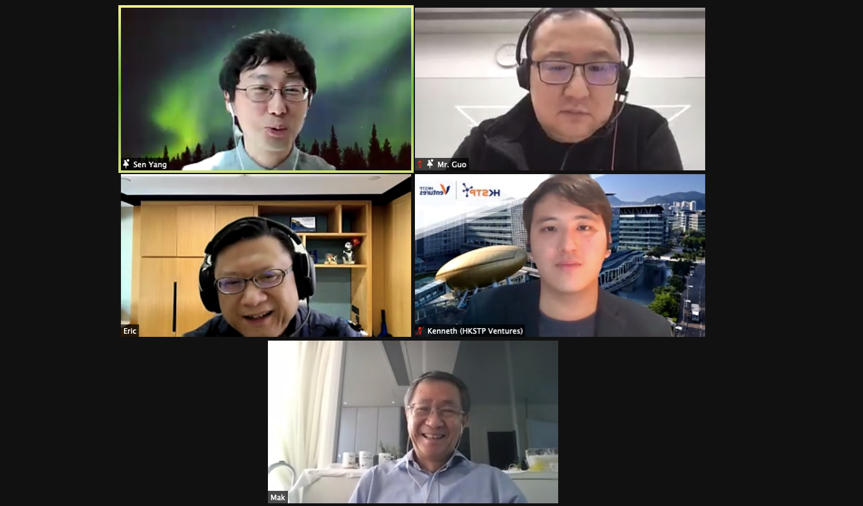 During the Q&A session, Mr. Eric Ho, director of AAMA-PRD, also invited Kenneth Lee to give some suggestions to those who intend to start a business in the field of quantum computing. Mr. Lee thought it was too early to start a business in quantum computing. Only a few industry giants have tried this. What entrepreneurs need to think about most is how to sell their services and consider the market situation before entering the industry.

At the end of this salon, Mr. Mak , Co-President of AAMA-PRD, presented a certificate of appreciation to all the guests for bringing cutting-edge information to the audience. These wonderful presentations are an eye-opener and benefit to all. 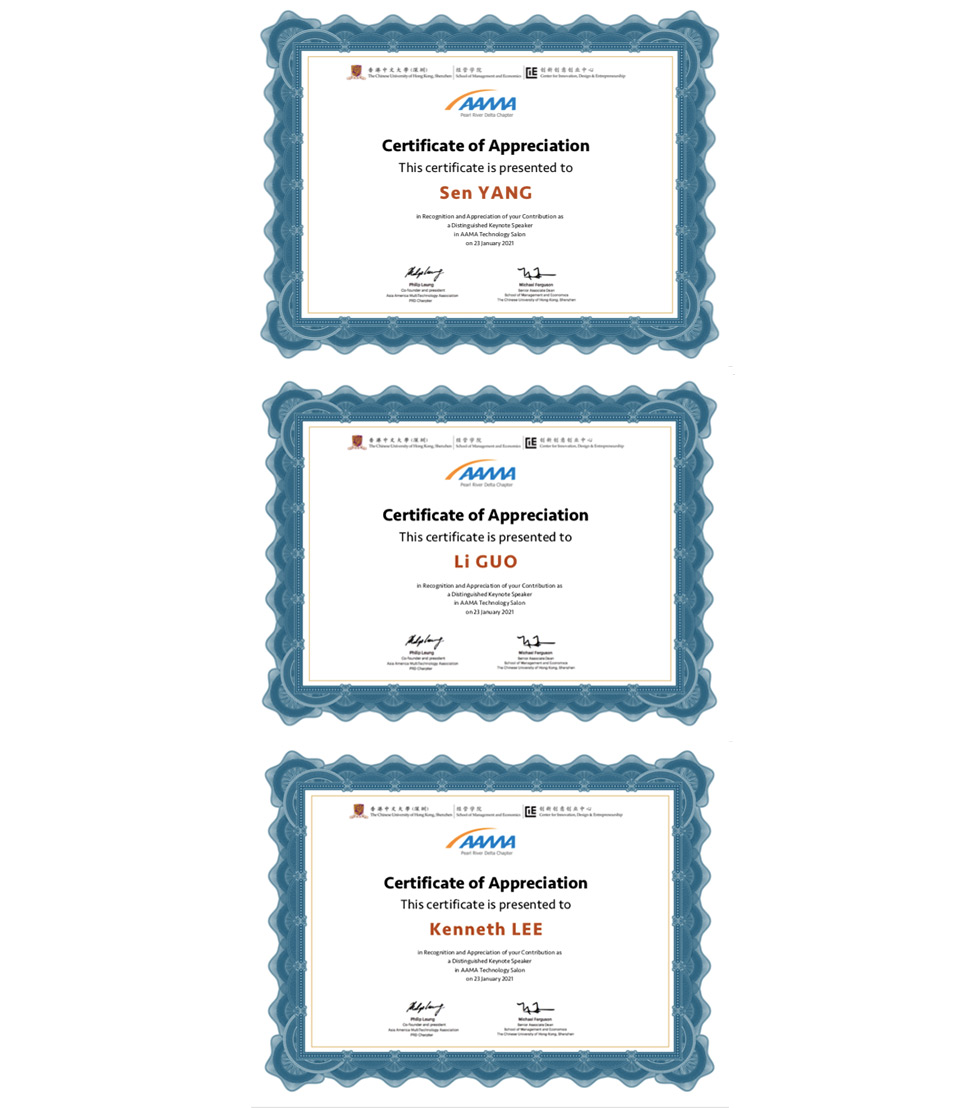